She’d been reluctant, and curious at the same time. She also wondered how he’d feel about the third person being a guy.

The women removed his shirt, and then pushed him back against the wall, teasing him with neck kisses, moving their hands down his belly. When he tried to do anything with his hands, they pushed his arms against the wall. Suddenly, he felt cuffs snapping around each wrist simultaneously.

Locked against the wall, blindfolded, he was powerless to do anything but listen. They stood right in front of him, and he heard the sound of their wet lips as they kissed. He could hear them break apart, and felt his pants being tugged down. His bulge strained against his tight jockeys, but they left him confined to those. They pulled the blindfold off, and he began to struggle against the chains binding him the the wall, but it was of no use. He had just enough chain to let him move a little, or sit on the hard floor. He chose to sit, and wait for his turn to join the fun.

But the words he heard next dashed any hope. “We decided we didn’t need you, hun. You’re lucky that we’re going to let you watch, although I can’t imagine it will be comfortable in those tight little shorts that you’re wearing.”

He groaned as they started to play. 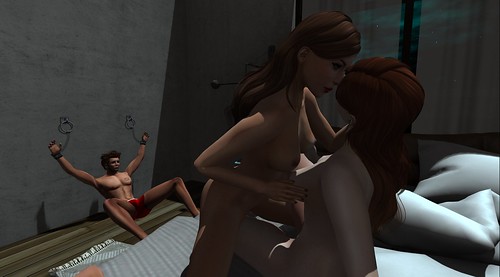